The originator of the project was the german traffic association (VCD), who teamed up with the local city traffic to work with a student class under the working title »Projekt 2050«. We splitted up in teams to make thoughts about future scenarios and work out a strategy, to point out the awareness of climate change to our generation. The claim was to think global, but act local.

I paired up with my long time ally Mona Sandmann, who was responsible for the artwork, while I took the creative direction. Unfortunately the briefing changed about every week, which made the work quite frustrating at the beginning. One conflict we had was the title »Projekt 2050«. The biggest problem we had was to address the campaign right, since the original briefing was to reinforce the motivation to use every possible kind of transportation that helps reducing carbon dioxide emissions – and that does not necessarily serve a bus transportation company in full effect. It turned out to be a conflict of communication between the two partners, that eventually stripped down the campaign in the end.

We had to differentiate between different target groups and unite those under the guise of climate awareness. We called them the »Neo-Mobile Generation«. So we picked up the three most common means of eco-friendly transportation: walking, biking and taking the bus. Now we had to analyze the pros and cons of each of those. Therefor we conducted an online poll and learned about the three chosen character groups. The most prominent insight was, that there are two opposing factors that define the behavior of the participants: the demand for comfort and the urge for physical fitness. Both had to be illustrated into the ideal world, which implies that there is a parallel anti-world, that had to be displayed too. To visualize our insights of the three investigated groups, we created a fictional character for each (the Dudes) and asked ourself questions of the following format: »what would character group a, b or c do in situation x, y or z and what happens if they don’t?« The results were illustrated and led to three posters, chosen by the clients. Since we did not believe that this campaign would have a big impact with only a couple posters, we intended this as a starting point only. The characters had to come alive and become idols, that our three character groups could identify with – presenting the corporeal individuals of these mentioned groups as true heroes of a new world. So we integrated a guerilla campaign (working title: Guerilla Dudeism), placing young people on the streets (looking just like our fictional dudes) and let them spread the word (and merchandise of course). There would have been infinite ways to extend this campaign, as soon as the dudes became icons. Unfortunately the campaign was downscaled, modified and mixed up with foreign ideas after we handed it out, so that out of the full campaign only one poster (the one that concerns the bus) made it to the bus stops of the city.

»All the young dudes carry the news …« David Bowie wrote these lines for Mott the Hoople in 1972. Now it was the soundtrack for our campaign. Three dudes should stand for three kinds of people, giving them motivation to carry on because it ain’t always easy being a hero. Mike is the fitness oriented dude, that loves to ride his bike. He’s fast between the city traffic and doesn’t need tons of coffee to wake up in the morning. Then there is Ruby. She is a flexible and confident girl doing things her way. She likes to walk and slow the hustle down a notch. If she’s tired of walking she’s surfing the streets with her longboard. Johnny is the more relaxed guy. He prefers the bus, where he can do stuff or just be lazy while the others are busy in traffic. In the parallel world, where the dudes have failed, there is not much left but bleak wasteland, an obese guy named Karl and some sassy polar animals that now claim the human world, for mankind has had destroyed theirs.

The colors were given by the clients color schemes. To address the young target group, we kept them at full saturation, creating a vivid atmosphere. The sketchy look should take out the battered, dull character of the climate protection topic. 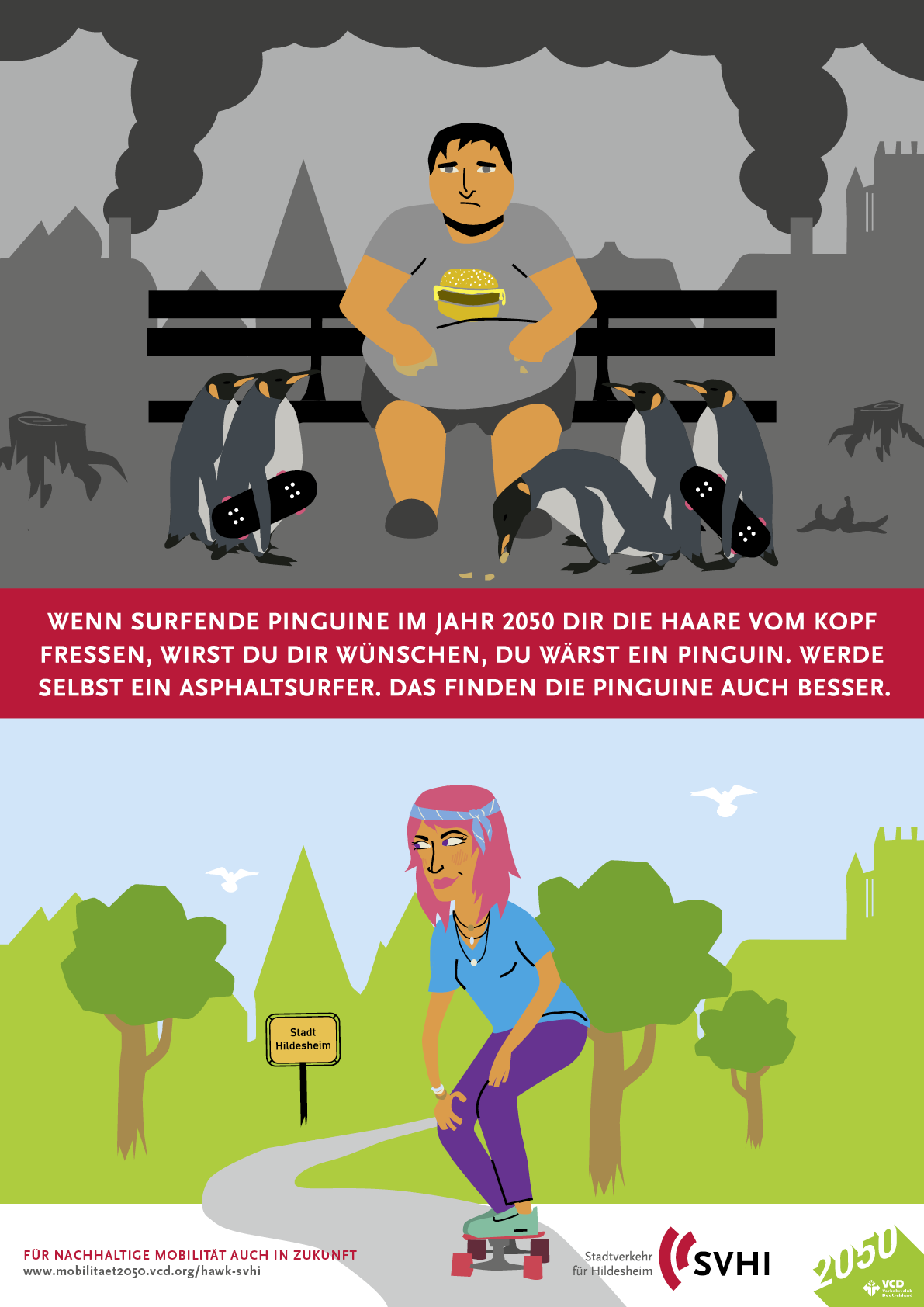 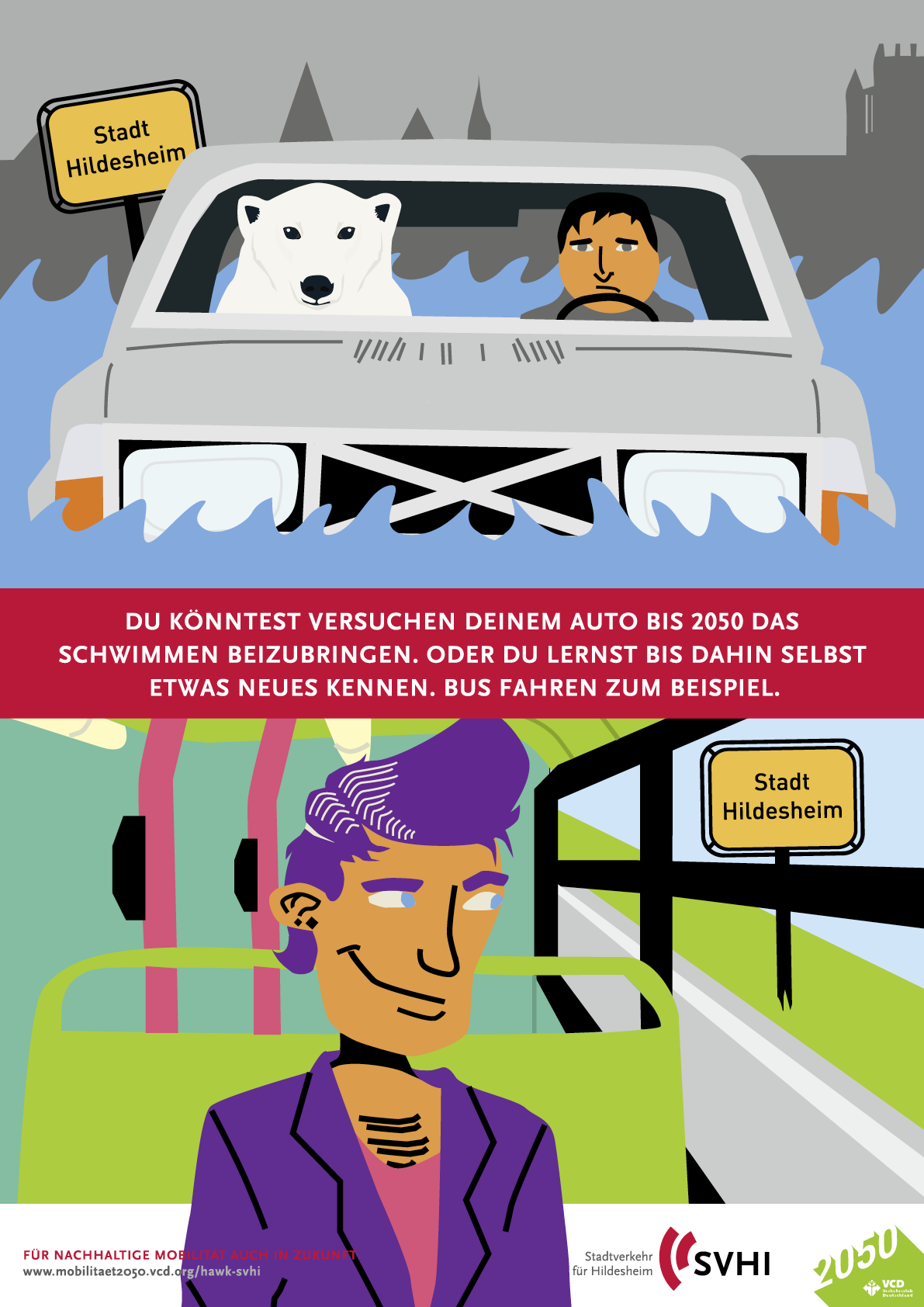 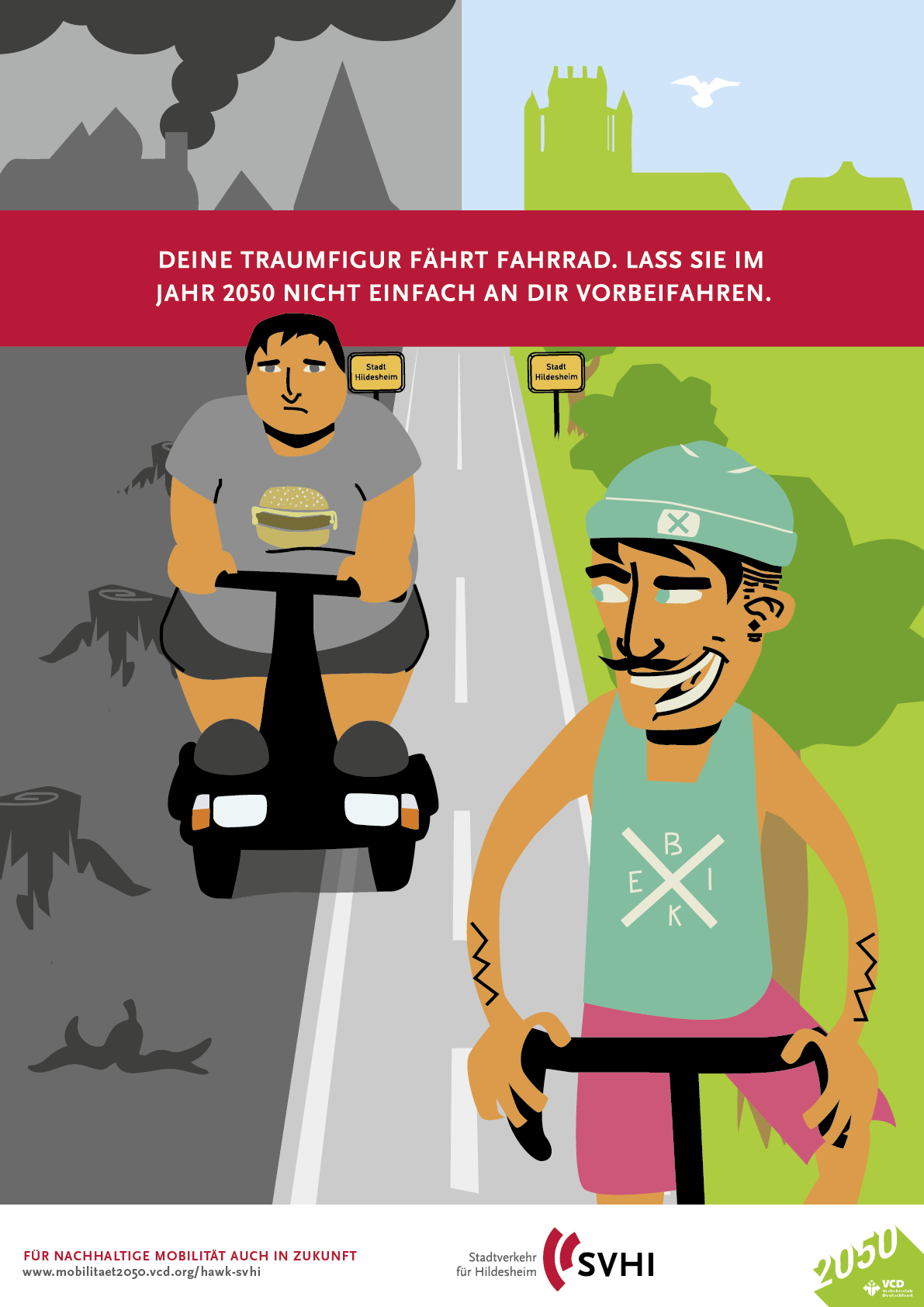 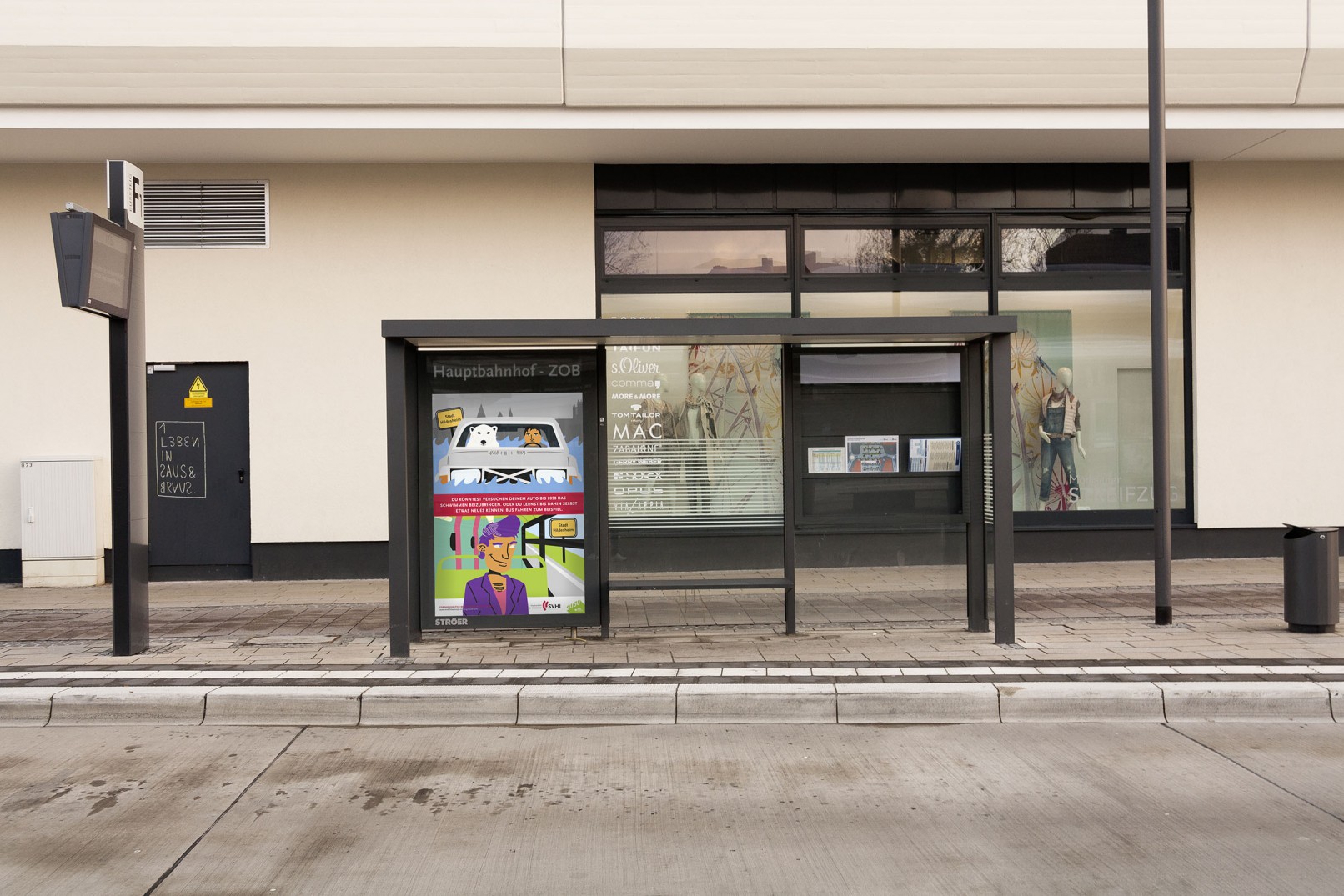 Advertising poster for the »Dudes Club« at the central bus station of Hildesheim. 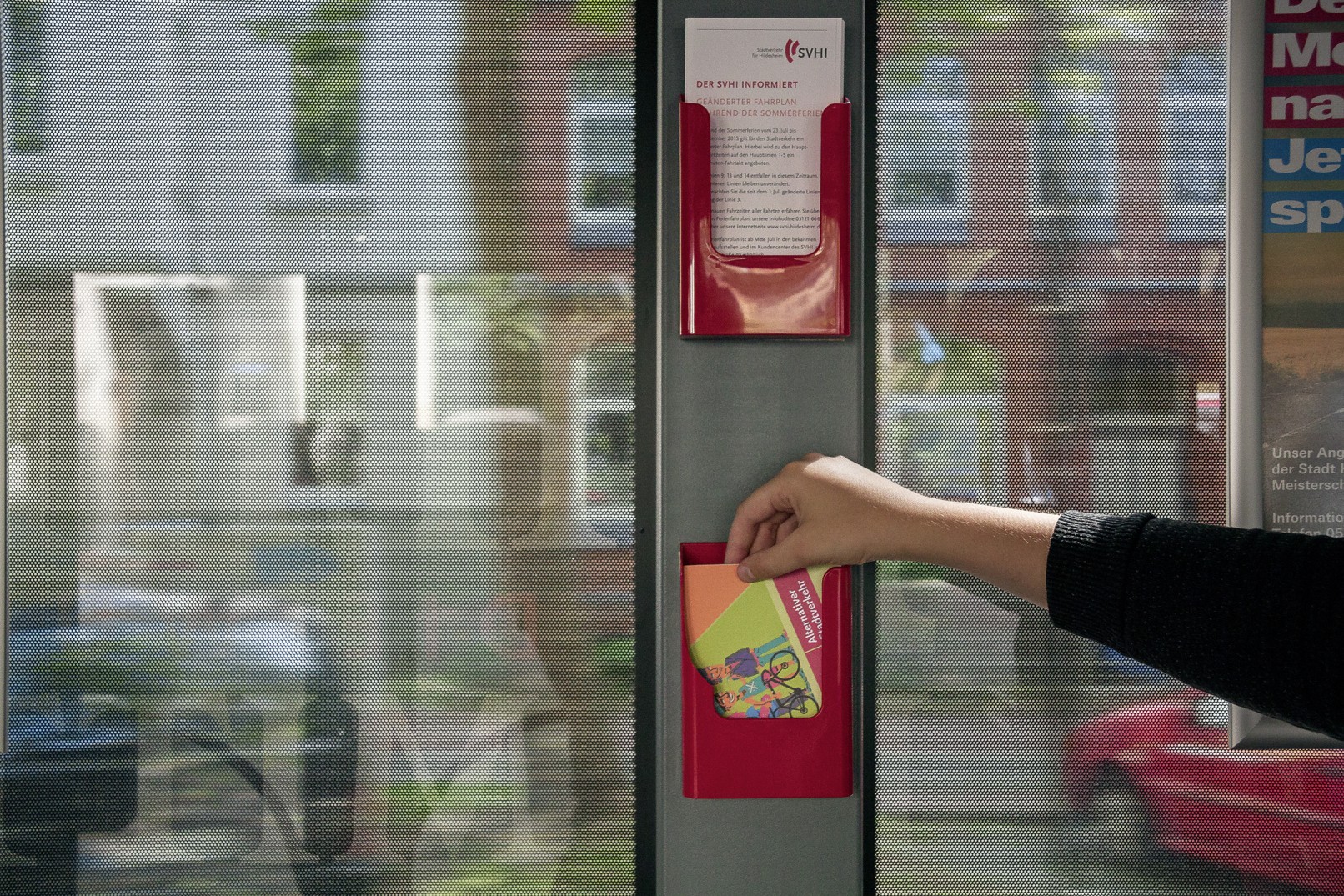 The »Dudes Club« flyer inside a brochure holder of a bus. 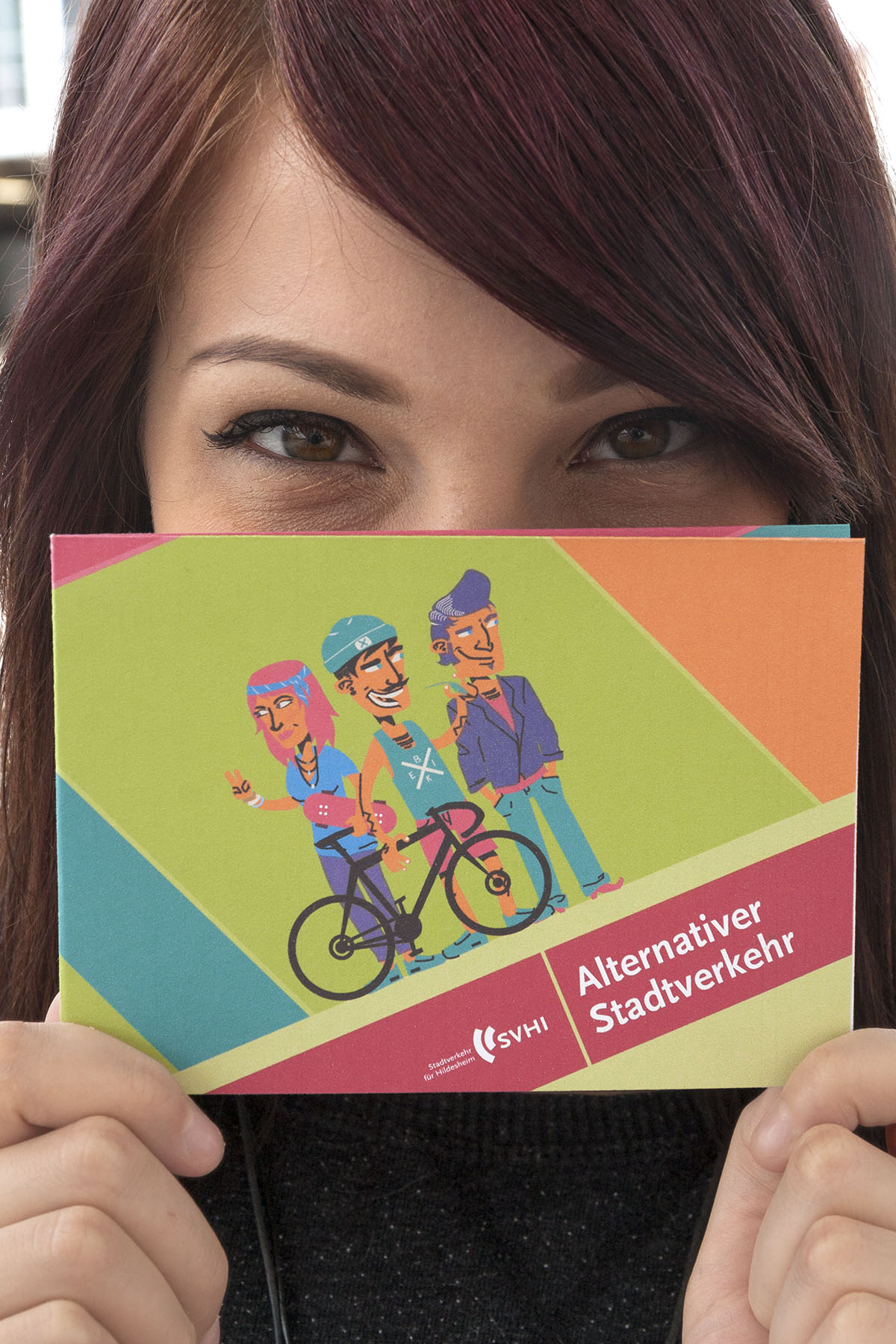 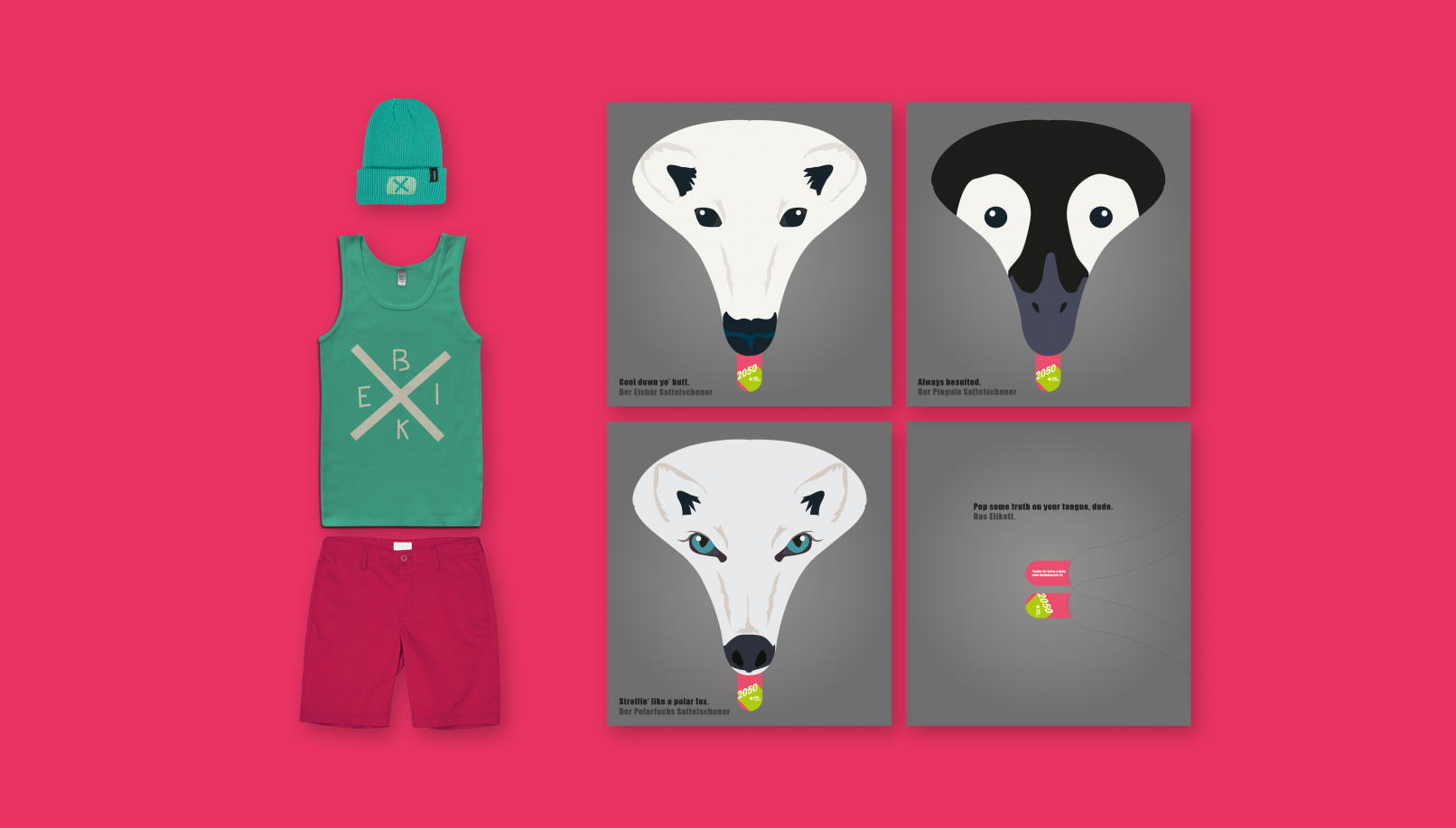 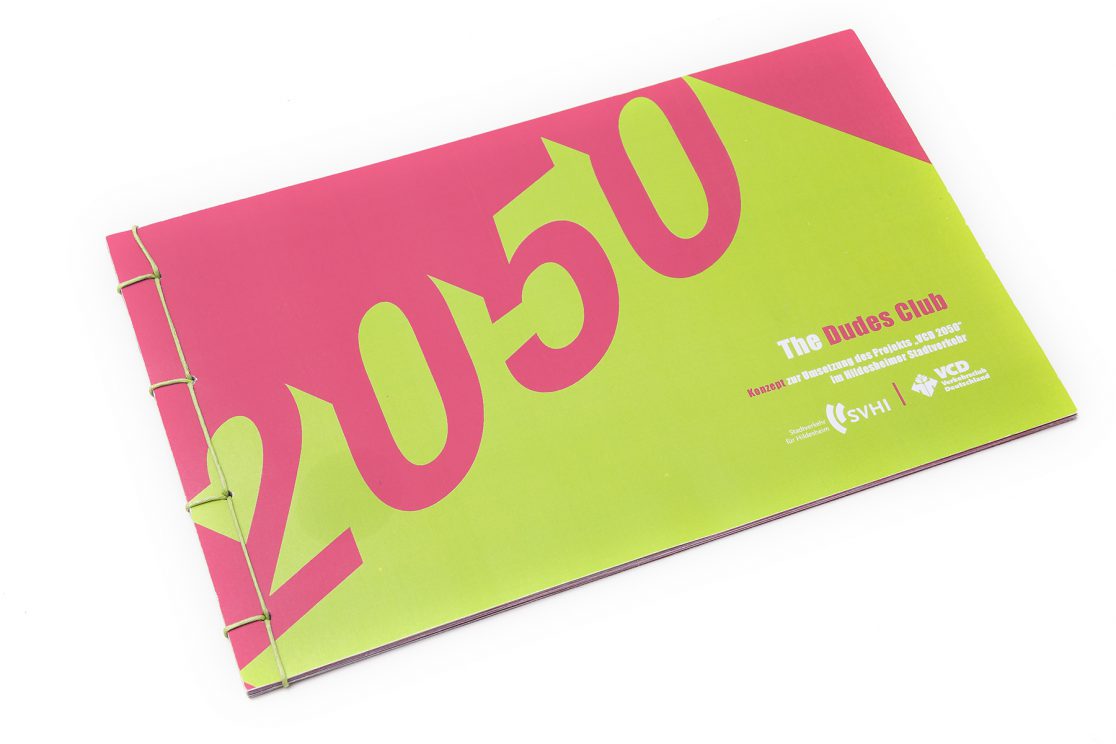 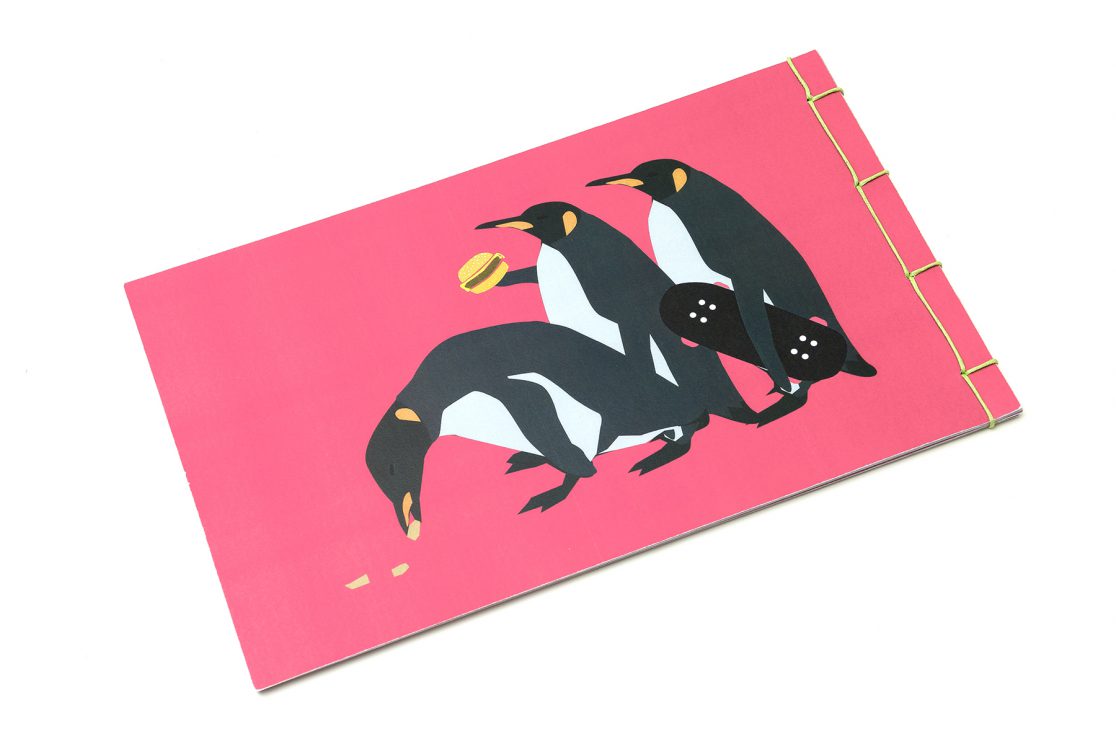 The »Dudes Club« concept booklet (back). 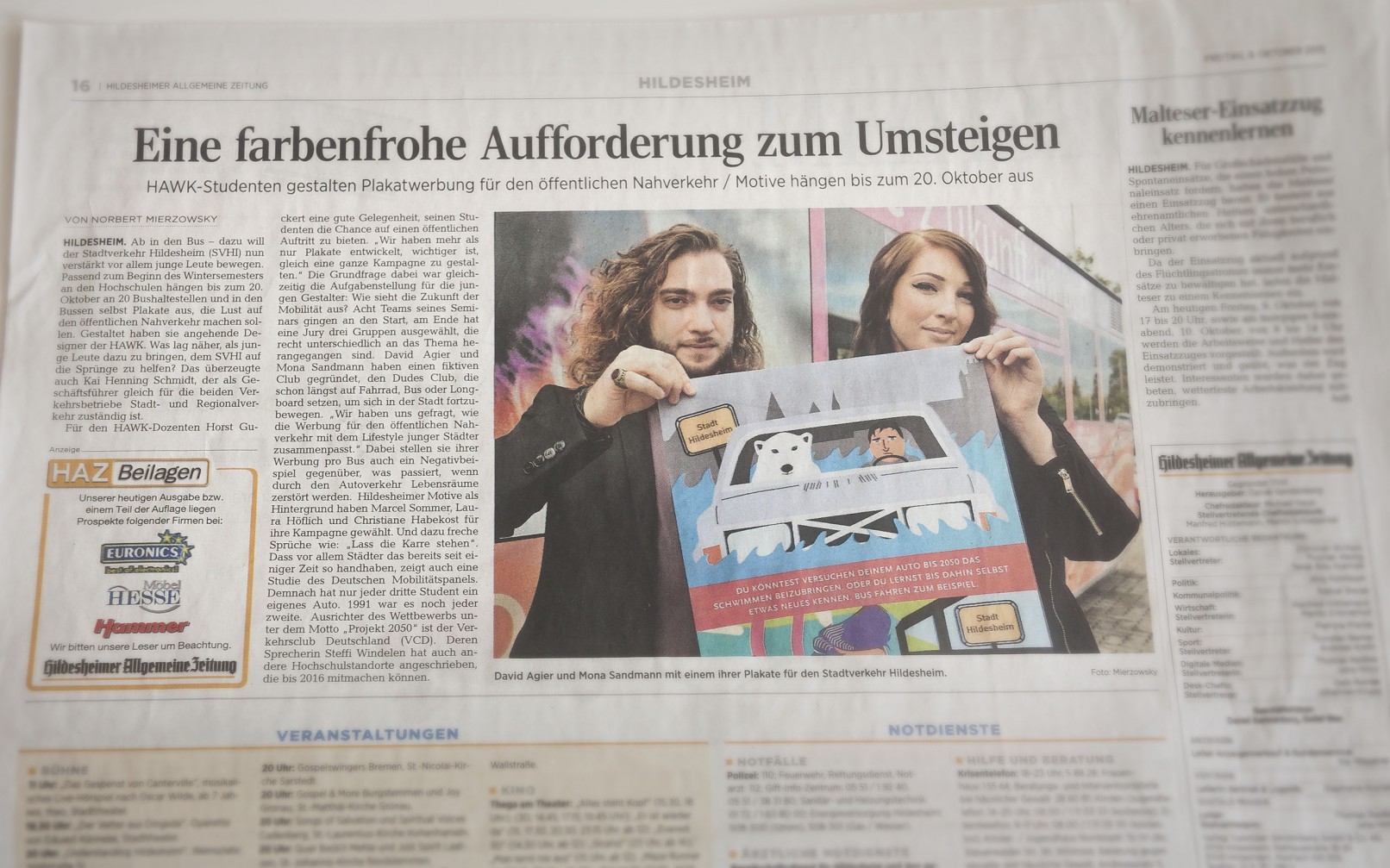 Article about the »Projekt 2050«.
Previous
Next